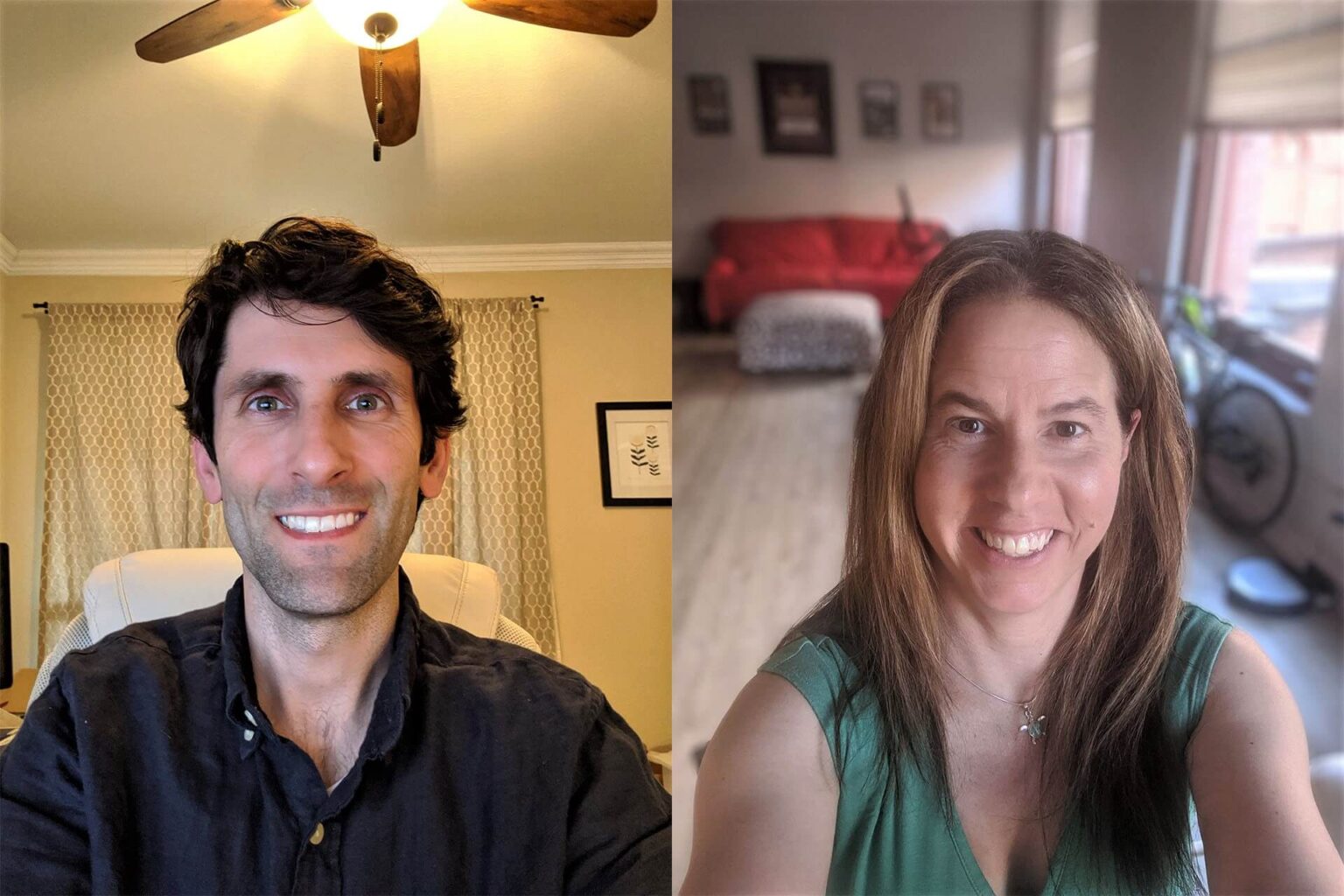 Allison Koch’s first day at Microsoft was a long time coming. So was Eran Samocha’s.

Both are newly minted Microsoft employees who, like new employees everywhere, are embarking on new career journeys under unprecedented conditions.

Koch, a self-described Microsoft fan, has been selling or advocating for the company’s products “for more years than I care to admit.” In her new role, she’s a customer success manager for the company’s Great Lakes Region in the United States. Her job is to help customers adopt and get the most out of Microsoft Teams.

It was a major moment for her when she showed up for her first day of work on May 4, even if she never left home to do it.

“Everything about this entire process has been virtual,” says Koch, who lives in Pittsburgh, Pennsylvania. “I haven’t met anyone face-to-face—I met my new manager on a Teams call.”

Samocha’s onboarding journey has been similar.

“When I started on April 6, COVID-19 hadn’t shut everything down yet,” he says. “My manager was going to fly in to meet me, and I was getting ready to go to new employee orientation.”

Then a work-from-home order went out across Microsoft and everything changed.

“Everything switched to virtual,” says Samocha, who is learning how to manage two Texas-based Microsoft Azure customer accounts from his home near Houston. He still hasn’t met his manager face-to-face. “The whole experience has definitely been different.”

There’s a new way of bringing employees onboard across Microsoft since the company started working remotely, says Kashay Sanders, the learning and development consultant for Microsoft Human Resources, who manages new employee orientation at the company’s headquarters in Redmond, Washington.

Microsoft needed to pivot fast, and Sanders, Cameron Thompson, director of Human Resources’ new hire program, and the rest of the Human Resources team partnered with Microsoft Core Services Engineering and Operations (CSEO), Microsoft’s IT and Operations organization, to make starting a new job at Microsoft just as smooth virtually as it was in person.

“We want people to feel welcome,” Sanders says. “We want them to know that Microsoft is excited to have them, that this is where they belong, and that they made the right choice in choosing us.”

When that’s done in person, everyone is brought into Redmond or another Microsoft campus. They meet fellow new employees starting on the same day, tour the facilities, get issued their equipment, and meet with people who help them get everything set up. A member of the company’s senior leadership team talks to them about what it means to work at Microsoft, and their manager comes to meet them. They are welcomed with open arms.

Producing all of that and a hot cup of tea isn’t quite as easy when no one can step foot on a Microsoft campus—a change that was initially hard to absorb for all involved. “It was jarring when we realized we couldn’t hold our New Employee Orientation event,” Sanders says. “It’s always been an in-person experience, and suddenly that was taken away.”

In all, two dozen Microsoft employees from across the company volunteer to host the weekly new employee welcoming sessions in Redmond. This group of co-facilitators was well versed in presenting Microsoft’s story in person—shifting to doing it virtually presented a big change.

That came in handy when she co-facilitated Microsoft’s first ever virtual New Employee Orientation (NEO) session for the first 250 or so employees to start working at Microsoft in the US after the company’s work-from-home order went out.

“The first thing was, we had to learn how to pivot our logistics quickly,” says Heniser, a senior business program manager in CSEO communications. “We had to rethink what the experience we normally had in the room was going to be for our virtual audience.”

She learned a lot right away when she tried presenting, engaging in the meeting chat, and running the slides at the same time during that first virtual NEO session. That proved to be too much and has been split between two people in subsequent sessions.

After the team got through that first session, the biggest challenge was replicating the connections and friendships new employees would have made going through orientation in the same room with their fellow new hires.

“We encourage everyone to chat with each other during our presentations and hold breakout groups where they can get to know each other and ask each other questions,” she says, explaining that their conversations are facilitated by volunteer employees who are also relatively new to the company. “We want to foster a sense of connection with each other and with our company culture that will stay with them when they finish NEO and start their jobs. To do that, we need them to have the same side conversations they would have had if they were there together in the same room.”

Sanders says the team has worked hard to smooth out the process so that it’s straightforward and predictable for hosts like Heniser to welcome new employees. The shift to virtual is helping the team bring in more facilitators.

“Now we’re able to cast our net wider for facilitators,” she says. “For the first time, it doesn’t matter where you sit in the US—it’s pretty awesome to be able to pull someone in from beyond the Washington state offices.”

The team has learned how to refine its presentation. Guidance on how to sign up for benefits and other actions for new employees is becoming clearer and easier to follow. Little things like recognizing that not everyone will be on the same version of Microsoft Teams have been worked out.

“We let people know ahead of time that their experiences will vary so they don’t get distracted trying to replicate exactly what we’re showing on the screen,” she says. “We have an occasional blip, but everything is running fairly smoothly now.”

The most important thing that the team had to realize is that everything doesn’t need to be perfect—it just needs to be welcoming, informative, and very clear on what the new employees need to do next.

“I’ve been so inspired with how our new hires have come to our virtual calls with so much excitement,” Sanders says. “They have so much desire to connect with us and with each other. They have extended so much grace—I’ve felt a lot of appreciation and gratitude from them.”

Unboxing your new PC is a big moment for new employees, and at Microsoft, where most employees choose a Microsoft Surface device, the moment is often extra special.

Koch’s new Surface device arrived at her home the week before she started.

“Everything was packed very nicely,” she says. “It included very well-written documentation about setting up the device—it was six pages long and walked me through exactly what I should do.” The instructions included setting up her phone as a second way to authenticate herself on her PC.

CSEO used Windows Autopilot to set up Koch’s new device, a new program developed in partnership with the Windows and Intune teams that enables CSEO to use the device manufacture image based on Microsoft’s enterprise image guidelines. All Koch had to do was power on, connect to the internet, authenticate, and the rest was silently hydrated via Microsoft’s Endpoint Management—Intune.

“Our goal is to help our new employees get through setup as quickly as possible,” says Mina Aitelhadj, a program manager on CSEO’s Modern Device Platform Team. “Using Autopilot has reduced the time it takes our employees to set up their new devices by 90 percent—it now takes them less than 10 minutes to get up and running.”

By the time Koch went through orientation, she had her machine working and had signed up for all of her benefits, save for one that required further processing.

“My team got me fully up to speed right away on my first Monday,” she says. “They had meetings with me to welcome me. My boss met with me, gave me the rundown of what the plan was for my job, who I’d be working with, and made sure I connected with my onboarding buddy, who was local.”

The switch to working remotely did make it difficult for some new employees and interns to get issued a computer, especially in India and other countries where new employees couldn’t leave their homes and shipping wasn’t allowed.

There were delays getting new machines in the US too, including for Samocha.

“When I started, Intel chips were back-ordered because COVID-19 had initially hit in China,” he says. “They couldn’t get me my new PC by the time I started.”

He used Windows Virtual Desktop to set up a virtual desktop on his personal computer.

“I had a seven-year-old MacBook Pro that I ended up needing to use,” he says. “I enrolled it in Intune, set up a virtual desktop, and was able to download the work version of Office 365.”

This allowed him to have corporate access, sign up for benefits, attend meetings, get email, and otherwise get started as a new employee. He wasn’t able to access the Dynamics 365 sales tool and some other core tools for his job, but he learned about the two Microsoft Azure accounts he would work on, began making connections with those he would work with, and otherwise started to find his way.

When he got his new PC a few weeks later, unboxing it and getting connected took 15 minutes, and all the settings and favorites from the virtual desktop carried over. “That part of it was much faster than I expected,” he says.

Microsoft is using Windows Virtual Desktop to get new employees and interns started at locations across the world where getting new PCs to new employees has proved challenging, says Jo-Anne Beaudet, an area IT manager for CSEO. She expects the company will use virtual desktops more frequently as the company continues to ask employees to work from home or in a hybrid fashion of from home and at the office.

The changes that have come with onboarding new employees while they work remotely has created new and interesting opportunities to improve new employee orientation across Microsoft, something the company was already overhauling when COVID-19 hit.

“Switching to doing this virtually has been challenging, but it’s also giving us new ideas and helping us to speed up our overall transformation,” Beaudet says.

Her colleague Robert Koester, a senior IT service operations specialist in CSEO, agrees.

“The beauty of Microsoft is you can be productive with just a few tools anywhere, immediately,” Koester says. “That’s a powerful statement.”

He says it’s been amazing to see that play out as new employees start at Microsoft, but also with existing employees who shifted to working from home very easily.

“We’re surprised and delighted about how well it’s gone,” he says. “With just a few technologies, we’ve been able to go so far so fast without needing to be in our offices.”